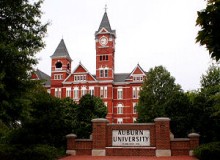 Auburn is Alabama’s fastest growing town, largely influenced by its educational atmosphere, which has made it the 9th fastest growing metropolitan area in the United States. As the largest city in eastern Alabama, its population numbers roughly 57,000 residents, with 460,000 in its metropolitan tri-county area

The town was first settled by the Muscogee people, also known as The Creek, in the early 1800s. As the town’s religious and educational character continued to grow with the influx of settlers, Auburn began to garner attention from around the nation. Soon enough, Auburn chartered its first post-secondary institution of higher learning in 1856, the East Alabama Male College, now known as Auburn University.

Although Auburn has grown to become one of America’s fastest growing cities, it was slow to take shape. Plagued by a brutal and repressing history for almost 100 years due to the American Civil War and Great Depression, Auburn remained relatively quiet and uninhabited until soldiers repopulated the area in WWII. The 1950s and 1960s was marked by exponential student population growth.

Today, Auburn holds a co-ed student enrollment of about 25,000 and the city’s schools system is ranked one of the tops in the nation. Auburn University is recognized for its research programs in areas like forest sustainability, molecular biosciences, wireless engineering, aquaculture and more. Its secondary school system is also highly ranked, with Auburn High School being known for its strong AP, IB and music programs.