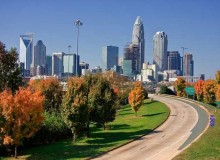 Charlotte has quite a menu of offerings. The Charlotte Motor Speedway, NC Blumenthal Performing Arts Center, Carowinds, more than 40 public golf courses – so there’s plenty to do in this city known for being the headquarters for several prominent banks.

Despite the marvelous attractions, however, education remains as important and challenging in Charlotte as it is anywhere in the U.S. The reasoning behind this is simple. As the city’s high schools continue to improve, students face increased competition from their peers.

Additionally, 39.8 percent of adults in Charlotte have at least an undergraduate degree, a rate 14 points higher than North Carolina as a whole. If one hopes to establish a career, considering the caliber of the competition, obtaining a college education is paramount.

Parliament Tutors offers an extensive range of services to Charlotte’s students, whether they’re in grade school, high school, at a four-year institution, or enrolled in an elite professional program. Our tutors assist in formulating plans that make success a reality. We realize the greatest component in the process is you – and we want to enable you to realize your full academic potential.

According to data from the U.S. Census Bureau, 88.1 percent of Charlotte’s residents have completed high school, offering further proof of the emphasis placed on education.

Even with the impressive numbers, students struggling with a particular concept can spend countless hours trying to teach themselves. Some are successful, but most find themselves losing confidence, writing off a test altogether, or just skipping what they don’t understand.

Working with one of our tutors provides access to an experienced teacher, someone skilled at solving problems that leave those trying to learn frustrated and discouraged.