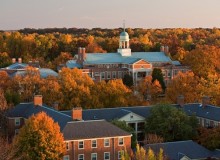 Known for its contributions to the fines arts, theater and technological research, Winston-Salem is North Carolina’s fifth largest city. Its city population nears 230,000, with its metropolitan area population even higher nearing 650,000 and up to 1.6 million when combined with nearby Greensboro and High Point populations.

Don’t confuse Winston-Salem for Salam, Massachusetts, however, which is known for its history of witchcraft. Instead, North Carolina’s Winston-Salem is known for its history in the tobacco industry, gaining it the nickname the “Camel City.” It is home to a number of private and public educational institutions ranging anywhere from elementary to the university level. The most notable school within its borders is Wake Forest University, as well as Winston-Salem State University, University of North Carolina School of the Arts, Salem College, Piedmont International University, among others.

With such a high number of prominent academic institutions in the area, which results in a very large student population, students in Winston-Salem face heavy competition when it comes to education. With so many students in the area, it may seem difficult for local students to stand out amongst others when trying to establish their unique profile. As a result, those who excel in their studies at a greater pace may outshine many others students who struggle with certain subjects, study skills and/or test taking skills.

Parliament Tutors offers a wealth of private tutoring and test preparation services for students in Winston-Salem, North Carolina. Whether you are searching for subject specific tutoring or standardized test preparation, Parliament Tutors has a specialist in all levels of education from kindergarten to medical school and everything in between. Without a doubt, our tutors will enhance your educational experience and help you achieve the study skills and test scores you need to stand out above the rest.